Hedlund huskies with awesome reputation are on comeback trail

From the time he was old enough to stand on the runners of a sled, Bethel resident Nels Alexie was taught to treat his dogs with respect. Feed them well, his elders told him. Give them lots of attention. One day, it will pay off.

That day came. Some 40 years ago, as a young adult, Alexie was returning home from checking his trapline. It was about this time of year, and mild temperatures made the knee-deep snow punchy and wet. Alexie started to feel sick. After a few hours and still nearly 40 miles from Bethel, he was too weak to stand.

So he stopped the team, opened his canvas sled bag and climbed into a sleeping bag. He closed the sled bag, told the dogs to go and fell into a deep sleep. It was just before noon.
At 5 p.m., Alexie said, he awoke and peered out of the sled.

"The dogs were crossing the mouth of the Johnson River, and they were still going," he said. "And I could not figure out how in the world they figured out how to go up the hills and through the overflow. They were bringing me home -- I was about six miles from home -- and they were happy because they knew that something was happening to their master because I never did something like this before." 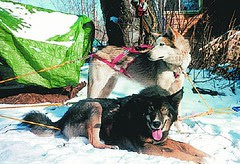 Ojai, standing, and Blue are Hedlund huskies from the same litter. Blue is a throwback to the bigger Hedlund dogs. Ohai is typical of more recent dogs. (Photo courtesy KIM FITZGERALD)

Alexie said as far-fetched as the story sounds, it is testament that a good dog really is hard to find. That's why, when he found out his aunt Rose Hedlund was hoping to revive the line of sled dogs she and his uncle Nels had developed over the past 50 years, he was desperate to get one. These dogs, now known as Hedlund huskies, would be descendants of the dogs that saved his life. Hedlunds were versatile, blending several traits. They were fast, though not as speedy as some. They were smart and loyal. They were tough, and their coats were ideal for sub-zero weather. They had the endurance of a marathoner.

"They were good dogs," Alexie said. "Snowmachines are fast but they're not dependable like dogs. Dogs never break, and snowmachines can't swim. Dogs, they can swim." 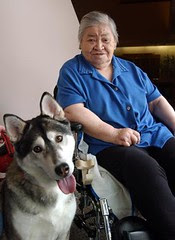 Rose Hedlund, 86, above, and her husband bred a line of racing sled dogs called Hedlund huskies. Local mushers are helping to revive the line of dogs. One of them is Cookie, owned by Don and Karen Llewellyn. (Photo by Jim Lavrakas / Anchorage Daily News)

THE HEDLUND NAME
Rose and Nels Hedlund were an admirable couple. She, an Athabascan Indian from the Iliamna region, and he a Yup'ik Eskimo from the Bethel area, settled in Iliamna, where they developed some of the best-known racing dogs of the time. Rose Hedlund has spent the majority of her life in Iliamna but now lives at the Mary Conrad Center in Anchorage. For her, connecting a nephew to a Hedlund husky is the realization of a dream.

Rose is frail now; aides help her with daily routines.
But there was a time when she was as skilled a dog musher as anyone in this year's Iditarod. She had grown up in the Bush, and her dogs were working animals, the only transportation for her and Nels, who worked a trapline, hauled wood and delivered mail using dog power.

"It was just as normal to us as going out and getting into the truck," said Emma "Chickie" Hill, Rose's daughter, and a retired teacher in Iliamna. "That was our mode of travel. I wish now I had paid attention to how good (the dogs) were, but we didn't know. To us, dogs were dogs."

Nels Hedlund, Alexie's uncle, was a master sled builder. Rose had an eye for spotting good dogs. Bill Vaudrin, a musher, trapper and compiler of the still-revered book, "Racing Alaskan Sled Dogs," learned everything he knew about dog mushing after moving to Iliamna as a teenager. Vaudrin's name was as familiar to the mushing world back then as Martin Buser's is today.

Although he never won, Vaudrin raced two Iditarods using Hedlund huskies and probably would have competed more had he not died in a 1976 car crash at the age of 32. In the preface to his book, he says, "People still talk about the rangy gray dogs Nels brought with him to Iliamna country. Rose has bred and raised and sold dogs that have raced in half a dozen teams in the World Championship Race at Anchorage. The Hedlunds are a legend in the lake area."
By today's standards, the Hedlund husky seems too big-boned for racing. Dogs that barely tip the scale at 40 pounds are common today, and Hedlund huskies are in the 50- to 65-pound range.

But don't be fooled. There is more to these dogs than their size, which is a throwback to their wolf and Siberian husky lineage.

"What is distinct about these dogs is the beauty, strength and intelligence that every one of them has," said Kim Fitzgerald, who runs Mush Knik and is responsible for bringing the line back. "I am floored by their intelligence."

When Fitzgerald hears stories like Alexie's, she is not surprised. The dogs are natural leaders with a knack for picking up the slightest changes on the trail.

Take Bart, for instance.
He was a Hedlund husky, with the telltale white muzzle, dark eyes and pointy ears that made him look so wolfish. In a series of mishaps while he was away from her, Bart lost a leg in a trapline but managed to recuperate. A year later he was attacked by a pair of wolves on Elmendorf Air Base while his caretakers searched for a Christmas tree. That encounter nearly killed Bart, but even after more than 100 stitches, numerous drain tubes and a skull fracture, Bart did not slow down.

"Even with three legs, he would still give rides because it was the only way he was happy," Fitzgerald said.

By the time she was 60, Rose Hedlund said, her knees began bothering her and running dogs became difficult. She still bred the Hedlund line, often mixing Siberians into the breedings to get hard-working animals that also were beautiful.

"You couldn't wear them out," Hedlund said. "They were good workers, but they were gentle."

Mushers loved the dogs. Joe May, the 1984 Iditarod champion, had Hedlund huskies in his team.

Rose Hedlund with some of her dogs at her home in Chekok on Iliamna Lake around 1935. (Photo courtesy ELLEN WASSENKARI PIKE / National Park Service)


David Walker, a musher in Holy Cross, twice won a local race called the Yukon-Innoko 200 in the mid-'90s using a team that included some Hedlund huskies. While they are not as fast as some of his current dogs, he said he appreciated their work ethic and stamina.

"They're a real powerful dog, and they had a good strong head on them," Walker said.

BRINGING THE HEDLUNDS HOME
"What I really liked about these dogs is their versatility," Fitzgerald said. "They can be really sprinty if you need them to be, and they definitely have endurance. I can put them with the old dogs and they will pace good. Or I can ask them to speed up and they will do it."

Fitzgerald bred one of her first Hedlund dogs, named Lobo, with a Siberian named Annie in 1991 to see what would happen. The result was a litter of pups that looked shockingly similar to the ones Rose had bred in Iliamna.

"Later, when I met Rose and we talked about it, she told me that she bred Siberians into them, too," she said. "We were thinking alike, and I didn't even realize it."

Over the next few years, Fitzgerald got to know Rose better, and the more she discovered about this feisty Iliamna Native, the more she came to admire her.

"For me, this has become about acknowledging Rose and Nels Hedlund," Fitzgerald said. "She has told me so many times that she wants to get the line going, but get it back to the Bush where it started."

No one is claiming that the Hedlund husky will become the latest Iditarod-dog craze, and Fitzgerald said she really doesn't care about that. While many of her more recent breedings have produced dogs with racier dispositions, she is most pleased about the look on Rose Hedlund's face when she brings a new puppy into the Mary Conrad Center.

"This was Rose's passion," Fitzgerald said. "The line had dwindled, but there had to be a way to get some of it back. The savviness of Rose with these dogs shows in this line."

As for Nels Alexie back in Bethel, he received his first Hedlund pup two months ago. She is named Lily Rose, after Rose Hedlund. The dog's energy is limitless.

"I'm very pleased with this pup," Alexie said. "I put her in harness for the first time last Sunday, and I know she is a pulling dog. I always have the females that produce pups for later, because the boys or the girls, they always want to follow their mama. And that will be good for me."


Daily News reporter Melissa DeVaughn can be reached at mdevaughn@adn.com.